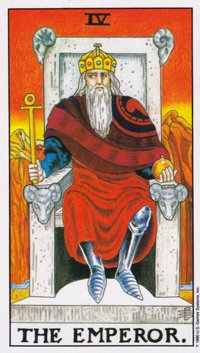 I wield my power wisely.

The Emperor represents a strong and decisive man. He is powerful, confident and a person of great authority. This is someone who is very much in charge of his kingdom. Notice that in this card the Emperor has silver hair and a long silver beard. This is meant to represent someone who is not only older, but who has learned many things through time and experience.

In his right hand you can see that he holds an ankh, which is the Egyptian symbol of life. In in his left a globe that represents the world that he rules over with complete control. If you analyze the card further, you will notice that it is predominately red. This color symbolizes the power of this card as well as the leadership and authority. If read in the reversed position, this color can represent the raw and intense emotions of aggression or passion.

If you are looking at the card in the procession of the major arcana, this card’s significance relates to the fool and the High Priestess. As the fool morphs into the magician, he transitions again into the Emperor. While this is happening, the High Priestess herself transforms into the Empress card. And this leaves us with the match up of the Empress and the Emperor. They balance each other out as she is free flowing and indulging in luxury while he remains grounded, unmoving and in control.

Questions for You to Meditate On

How can I be a good and fair leader?

What drives me to be successful?

When do allow my emotions get the best of me?